Well.. not THAT busy.

So, life has been busy of late. Not stupid busy like last year (last year I flew over 90,000 miles in the continental US/Canada; this year only I’ll clock only about 65,000) but still busy. I suppose it’s a bit of a mid-life crisis (although I could have sworn I had one of those about 15-20 years ago) but I’ve been re-evaluating where I want to be and settle down at. Right now I have 3 main areas: Edmonton (Alberta); GTA/Ottawa (Ontario); Halifax (Nova Scotia). There are pros and cons to each (most pros are related to family/friends that are in those areas). I also have to consider that ultimate “What-if I lost my job” and what opportunities would exist. This is one of the bigger cons for the Halifax area with weather being the 2nd thing (I can handle only so much rain and gray skies). But then there’s the ocean and the sound and smells that come with the Atlantic (very different from the Pacific). And, of course, being closer to family in both Nova Scotia and New Brunswick as well as getting back to my Acadian roots.

That said both Toronto and Ottawa pull me because of friends that are in both areas. Toronto is milder than Ottawa for weather, particularly in winter. But I grew up in Ottawa so I’m familiar with cold winters. In fact, the few memories that linger are of clear, sunny days walking atop crisp snow and falling through to the soft fluffy layer under. There are more job opportunities in both cities (Toronto/GTA moreso than Ottawa). But Ottawa is a bit drier than Toronto so winter doesn’t “soak” into the bones (cold is cold when you start getting into the -15 or lower temperatures, humidity notwithstanding).

On the west end of Canada, Alberta (and specifically the areas around Edmonton) appeal since it’s a drier area and a lot less taxes. Not surprisingly, there is a great community in the downtown Edmonton area near the University. And of course, family. The winters match Ottawa in how cold they get but are far drier which makes it more bearable (to me, at least). I’d have to get used to, again, cold weather but I’m pretty good at adapting so I’m sure I’d be able to do it. There are few things that are driving my desire to return home.

The first is that I’ve resigned myself about the idea of permanence in the US. Part of it is cost. Where I’d love to live is unbelievably prohibitive in cost, even more than New York City. I enjoy California a lot but between the income taxes and the cost of land and housing, it’s just too much. And areas that are affordable have a variety of other challenges for me. I also admit to missing my Canadian Healthcare. I’ve been lucky with the doctors I’ve found here as they have been definitely good with excellent advice, good patient manner and just a general sense of caring about their patients. But the bureaucracy behind a lot of what happens here is very frustrating. It’s not that it’s necessarily better but it’s something I know and feel far more comfortable with in Canada. A quirk, I suppose.

The second is that I’m truly homesick. Americans are amazingly friendly and open towards anyone (as individuals in general; there are always exceptions that appear in the news). That said, I miss the slower, gentler Canadian view of life. Canadians have always maintained a unique culture to the US (even within Canada there are varying degrees of “Canadianism”) but it is definitely there. And I miss it.

Tied to the first point is the immigration reform that will likely be added over the next year or so. It is very likely that I will be pushed farther back in the line for legitimate immigration to the US (i.e., a green card) such that I wouldn’t get it until I retire. Since K is very keen about moving to Canada in general and the length of time it takes to do this (plus the fact that it’ll likely be easier for her to immigrate to Canada as a legal immigrant given her expertise and skills), it may make more sense to go north than to stay here. Marriage is option but given my status I have a feeling it may not be as easy as we’d like unless I get my gender identifier changed (that may yet happen). So lots of influx. That said, however, I still hold dear to the dream of owning a house and having permanence somewhere. Whether that’s a realistic idea or not is another matter. When I consider the chart to the right, it’s scary. It’d mean that it wouldn’t be until well into retirement would I own my own home. And that’s assuming I buy now. Traditional housing is definitely outside of the plan. Our current “beach cottage” is a whopping 796 sq ft (I measured recently). But here’s the kicker: I suspect we could live in half that. If we really tried we could even go a quarter of that. To that end I’ve been looking into options for what would work. We could rent but that still means be responsible to a landlord and sometimes that can be good or bad, depending on who we get.

Additionally, I’d rather more money go to us for our fun than someone else. I’d also rather we escape from some of the consumer-focused society and get closer to each other as well as nature. I recently finished reading Twelve by Twelve by William Powers. It tells of his year of living in a 12 foot by 12 foot house and what the experience was like. Now, I know that 12×12 (or 144 sq ft) is a bit too small for us, I do believe that 400 sq ft for a living area with two small “studios” for home offices would be more than adequate. It would mean changing our lifestyles a lot. One of the goals is to truly minimalize all the “stuff” we have. For me this is extraneous clothing and books mostly. I figure if we can spend the next two years purging stuff as much as possible and living with just what we have we’d be good. In that time, I also want to set aside money towards purchasing land (a 3-5 year plan for money for land is the goal). 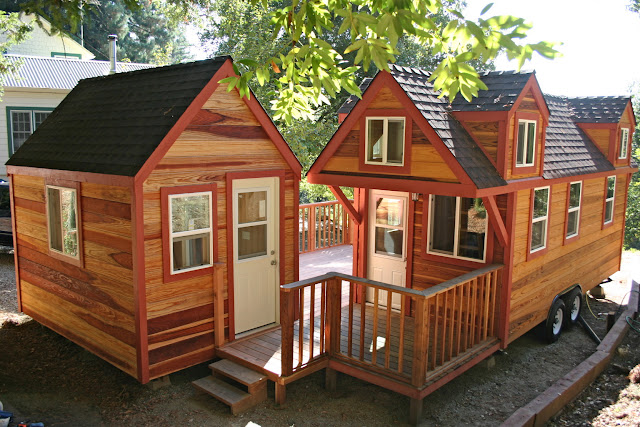 And then we’d build the house using ideas and plans from existing tiny house developers. One idea I’ve already come up with is the idea of the studio office. It would also act as a guest bedroom. Now this came from Molecule Tiny Homes and the “main” house is a bit too small at 144 sq ft but the idea of attaching the studios via a deck is very appealing. I’d probably add a bit more space between the house and the deck generally. One of the reasons why I like the way Molecule Tiny Houses do their designs is that they do full staircases in their designs as opposed to the ladders that many do to the loft. I’m not getting younger and my knees are showing the wear-n-tear from my early goalie days.

Now, building a house isn’t an easy feat but I do believe I can do it. There are workshops offered by the likes of Tumblweed Tiny Houses (they have designs up to 900 sq ft). Once the house is built and settled, then I’d want to go about working on a permaculture garden, one that is pretty much self-supporting. But for this to truly work I’d need to be traveling far less than I currently am. My hope is that I can stay with the company but by the time I get to this stage be in a more managerial role with reduced travel and enjoying the benefits of tele-commuting.

So the plan I figure we’d need is as follows:

1. Minimalize by getting rid of what we don’t need. We got rid of the TV, listen to the radio more, talk more and read more already by doing that one step. Netflix and blocking Hulu are next. Estimated time frame: 2 years.

2. Figure out where in Canada to move to and live in that area for a year or so (this is largely to see if K likes it and wants to remain there). After a year, start shopping for land (2-20 acres; excess acreage would be allowed to go natural while an acre or so would be for garden). Estimated time frame: 2 years

3. Once land is purchased plan out what the house will be like and what things MUST be included. And what are “nice to have” options for later. (e.g., outdoor firepit). Estimated time: 1 year

4. Build house. I’ll likely high a plumber and electrician for certain things (e.g., hooking up solar, ensuring wiring meets standards, etc.) but the bulk of the work can be done by us. Estimated time: 1-2 years.

5. Move in and work on self-sustaining garden. The idea is to utilize a permaculture concept so that it’d be self-regulating. That would take 2-5 years to complete and get going I believe.

Ultimately the idea is to be near completely reliant on the land and not be on the “grid” as much. For now, we’ll just take tiny steps forward towards the ultimate dream.